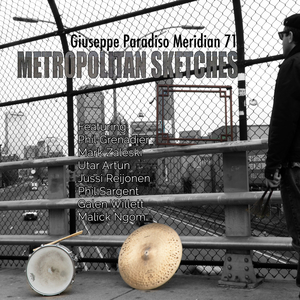 Giuseppe Paradiso started his musical studies on drums at the age of five years old. He graduated
from Berklee College of Music in Boston, USA as a multiple scholarships recipient and from the Italian conservatory of music “N. Piccinni” in Bari, where he studied also percussion instruments, piano and composition.

As a leader he released in 2012 the first album “Otherness Collection” with his international band
“Meridian 71” based in Boston, which features all his original music. His upcoming new release as a
leader “Metropolitan Sketches” will be released on February 12, 2020. He appears on several
recordings, Radio programs and TV in the United States and Europe such as the Spanish TVE LA2
“Entre Dos Aguas”, a documentary produced by 7 times Latin Grammy Award winner Javier Limón.
In 2013, he co-founded the ‘IN MOMENTUM Concert Series’, a bi-weekly event at the Outpost 186
in Cambridge, MA, focused on improvisation and creative music, involving multiple collaborations in aconstant growing community and a unique environment to enhance freedom in artistic creation.

From a very young age, Italian-born, Boston-based drummer and composer Giuseppe Paradiso always felt like a person who was a little different. He’d been exposed to many different styles of music as a serious young drummer and delved headlong into everything from flamenco music to jazz, bebop, pop and the melancholy cadences of southern Italy’s funeral marching bands that first inspired him. But he never really felt like he belonged with any one group until he moved to Boston after receiving a scholarship to attend Berklee  College in 2008.

Inspired by the multiculturalism of that city, Paradiso’s writing began to combine elements from all the different cultural influences he encountered. He’d struggled for many years to find a musical identity, and suddenly the opportunity to work so closely with people from so many different cultures transformed what was once a struggle into a distinct creative advantage.

This is what inspired MERIDIAN 71, a cross-cultural music project that Paradiso created and has led since 2012. The project, whose name comes from Boston's longitude - the 71st meridian that passes precisely through the eastern part of the city - is now set to release its second album Metropolitan Sketches (to be released 02/12/2020) featuring original compositions by Paradiso which he performs with an eclectic and multicultural ensemble of well-established Boston-based musicians.

“Boston is the location where I met musicians from different parts of the globe with whom I deeply connected and spoke the common language of music,” reflects Paradiso. “It felt like I had known for a long time that at some point in my life I would have met musicians just like them, from way before moving across the Atlantic in 2008. Meridian 71 becomes then the creative laboratory and space to develop this music.”

Median 71 is more than a band in concept; it's a dynamic and ever-changing musical project with a revolving lineup and a driving vision to create several more albums in upcoming years. The new album differs, both in terms of lineup and musical themes, from the projects first release Otherness Collection, which came out in 2012.

“I think my writing on this album is more mature, as seven years have passed by since I first began working on it,” reflects Paradiso. “On the previous work, the tendency was more toward the jazz field, whereas on Metropolitan Sketches I wanted to incorporate more of my deeper influences. This project’s lineup reflects exactly those influences, manifesting somewhere between a jazz, Mediterranean, and West African sound.

Paradiso began his official training in music when he was just five years old in the Southern Italian town of Puglia. At the age of 14, he was invited to attend the “N. Piccinni” classical conservatory where he studied classical music with a focus on percussion, as well as training on classical piano and classical composition for eight years.

“I started to compose when I was about sixteen,” says Paradiso. “Some of my major inspiration for writing, believe it or not, was actually the music of marching bands for funerals in southern Italy. I was very inspired and touched by the funeral music of my hometown, and when I was sixteen I even wrote some funeral themes. So, my writing, I guess, has always been inspired by this melancholic key.”

This inspiration accounts for the heavily cinematic tone and the thematic thread of 'a search for belonging' that runs through the tracks on Metropolitan Sketches.  The first track “Nomvula (Mother of Rain)” is inspired by the life-story of one of Paradiso’s very dear friends who’d immigrated from South Africa during apartheid. A black woman who arrived in Boston as a refugee when she was just twelve-years-old with no parents, no family, nothing, her life-story really resonated with Paradiso’s own search for belonging, which led him to the historied metropolitan immigrant hub. Musically, the track is a little bit of a combination of her life story merged with musical inspiration Paradiso felt after watching a movie about the life of John Coltrane.

The third, fourth and fifth tracks on the record comprise a trilogy story that represents a piece of Paradiso’s own family heritage. His mother's mother was a gypsy descendent, and after watching a movie about the history of those nomads, he was again inspired to write something about his roots. “Introduction to Tuntkah,” is a haunting drum solo piece that tells the story of a caravan moving along slowly across distant lands. Then, when coming to a halt at the end of the day, a drummer would play a sequence meant for collective healing and giving the travelers the energy to keep moving forward. “Tuntkah (The Nomad King),” is a story Paradiso created in his mind when he imagined a king who would give up his kingdom and all his wealth and fame to live the wandering life of a nomad. And “A Partial Life Story” depicts the nomad king arriving in some new place where nobody knows him.  Says Paradiso, “I had in my mind when I was writing that song,  that people often get an idea of you, but there’s always a whole side that they won't ever really know. A part that is always a mystery. So, the impressions we get of people are only partial life stories."

The final track of the album “Metropolitan Sketches,” which is also the title track, is a composition Paradiso started way back in 2011 and finished nearly six years later in 2017. The varying instrumentation, time signatures and moods of the track invite the listener to imagine they are cruising into a vast multicultural city, and as they pass through from area to area, they experience different atmospheres, different kinds of vibe, different colors, different cultures and foods, and so on. All within the same city. “I built the song in that way with a lot of different sections, very different from each other, to bring the essence of the truly multicultural city to life”